The Economic and the Political 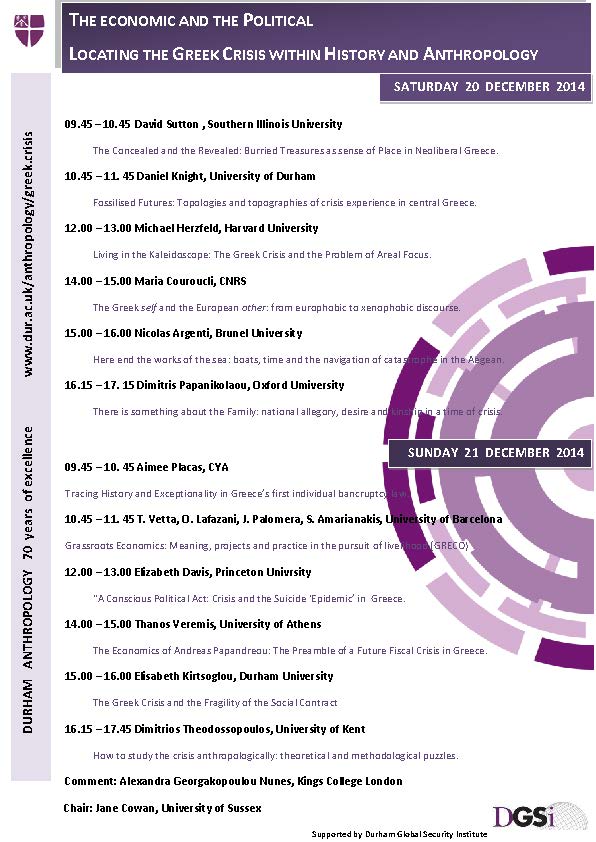 The Economic and the Political: Locating the Greek Crisis within History and Anthropology

Four years on from the first international bailout, scholars of Greece continue to piece together the complex social and political factors that led to the financial meltdown and how people contemplate the radical changes brought by the current crisis. Debates rage about the severity of the present situation in relation to previous eras of socio-economic upheaval and to what extent the emergent social responses to increasing poverty and suffering can be deemed unique to the 21st century condition of neoliberal austerity. In attempting to contextualise the current crisis, both researchers and interlocutors revisit the ‘messy’ histories – official and unofficial, archival and oral – of Modern Greece. As familiar feelings of exploitation and occupation intensify, worrying signs of political polarisation bubble to the surface. Are the social reactions to the crisis the inevitable outcome of long-term institutionalised attitudes towards finance, Europeanisation, modernity, the nation-state and immigration?

Commentaries on the current crisis often reference periods of past turmoil, present suffering and the future ambitions of government and citizens. Teeming with political rhetoric and the ever elusive search for accountability, people regularly draw on past events, as well as future aspirations, to come to terms with drastically declining living standards and the feeling of abandonment by their government and European partners. Since the inception of the Modern Greek state, the country has experienced fluctuating periods of social, political and economic prosperity and shortage. Violence, discrimination, political radicalisation and secondary economies have woven a rich tapestry for nearly 200 years, framed in theories of institutionalised nationalism, crypto-colonialism, foreign interference in the state-building process and ever-popular conspiracy theories. The Greek people produce thick narratives which seek to contextualise the crisis in a rich history of relations of power and what has been termed the fragility of the social contract. Yet the media headlines – soaring suicide rates, immigration policy, education reform, energy poverty and the rise of the far-right – are perhaps surprisingly void of historicity. Equally important are the aspects that make this crisis different; can unique emergent practices be identified?

This workshop will bring together leading scholars from history and anthropology working on numerous aspects of Greek crises, past and present. We hope to open a dialogue between the disciplines to demonstrate the fruitful combination of ethnographic and historical research, delocalising the current crisis and placing it within a complex historical context of power asymmetries. We invite contributions that address past periods of social/economic/political turmoil, the history of the present crisis, comparative examples of financial crisis, the contradictions of official and lived histories, and the social responses to periods of dramatic change.